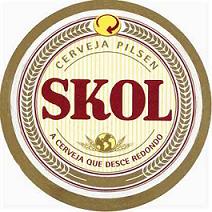 Skol beer began its life in 1964 as the brain-child of brewers who were British, Canadian, Swedish and German. Their goal was to bring their individualized talents together to create a beer that would be well-received on a global basis, but those big dreams didn't work out so well.

Skol was produced by the Dutch Oranjeboom Brewery from 1973 to 1982, but it failed to find any measure of success in the Dutch market.

Largely produced by the United Kingdom's Carlsberg Group, Skol eventually found its niche as a top selling beer in Brazil, and most consider it a Brazilian beer despite its grandiose beginnings.

Skol is also available in more than 20 other countries, and its market share of 2.2 percent puts it in fifth place of the best selling beer in the world.

Skol brewers utilize the finest ingredients to deliver this pilsner-style lager with a fruity and hoppy taste, and an alcohol content of 2.8 percent.